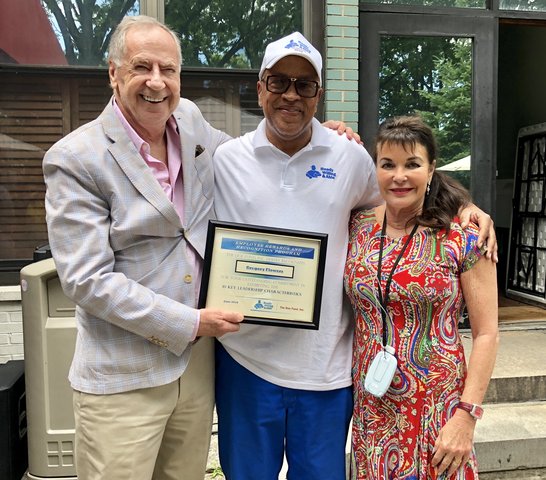 Born and raised in the Bronx, Gregory Flowers spent six years as a U.S. Army Paratrooper. After his military service, he fell into a two-decade spiral of drug addiction, homelessness, and prison. He entered Ready, Willing & Able the day after his prison release determined to transform his life—and hasn’t looked back since.

Today, Gregory is a member of The Doe Fund team, where he supervises street cleaning crews in downtown Brooklyn. He works every day with trainees in Ready, Willing & Able who are turning their lives around and reentering the workforce.

Last month, The Doe Fund recognized Gregory’s amazing contributions to the Brooklyn community and the Men in Blue with an Employee Recognition Award. We caught up with him to learn more about his incredible transformation—from rock bottom, to mentor and star employee at The Doe Fund.

When did things start to go wrong?

After I left the Army, I came home and found out that my dad’s girlfriend was freebasing crack. One evening, she invited me to try it. I was 29 and I’d never been high in my life, but one hit and I was done. It’s that addictive.

At first, you can be an addict and stay functional at work. But pretty soon, everything fell apart. I lost my job and started dropping down the social ladder until I was surrounded by people as desperate as I was.

When did you first come to Ready, Willing & Able?

The first time was in 2000, but I was only there for three months because I wanted to get back to my girlfriend. We were homeless, sleeping in abandoned buildings and cars in the Bronx. I was selling discarded mattresses to refurbishers to support my addiction — but that wasn’t even my rock bottom.

What was your rock bottom?

One day in 2007, my girlfriend and I had just $5 left between us. We were going to buy something to eat, but instead we talked ourselves into getting one last rock. That was when we were caught.

At 50 years old, I was sentence to a year in prison. That was my wake-up call. I decided that, as soon as I got out, I was going to do something good for myself.

After so many years homeless and struggling with addiction, how did you keep that promise to yourself?

When I was locked up, Naz Griffin (Director of The Doe Fund’s Bushwick, Brooklyn facility) stayed in touch with me. He told me that, if l was really serious about turning my life around after prison, he had a place for me.

It’s amazing. I see my kids doing great — my son is getting his second college degree, my oldest daughter is working on her Masters, and my youngest daughter works for the MTA.

I’m engaged, and my fiancée and I live with our dog in a beautiful home. We’re getting ready to go on our first trip together to Jamaica. Since I graduated from Ready, Willing & Able, I feel like my life has been up-up-UP.

What advice do you give to trainees going through Ready, Willing & Able?

Internalize what you’re learning at The Doe Fund. Don’t make hasty moves. And, most importantly, you can do anything you put your mind to.

About Author: The Doe Fund